You are here: Home1 / General information and signalling

The European Society for Clinical Nutrition and Metabolism (ESPEN) defines malnutrition as “An acute or chronic condition in which a deficiency or imbalance of energy, protein and other nutrients leads to measurable adverse effects on body composition, function and clinical outcomes .”

In a consensus statement by ESPEN (2016) on the terminology of clinical nutrition, and related disorders and conditions, malnutrition is regarded as a nutrition-related disorder, in addition to sarcopenia and frailty, overweight, obesity, micronutrient abnormalities and the refeeding syndrome. The causes of malnutrition can be divided into somatic, functional, psychological and social factors. Often several causes play at the same time.

Somatic factors can be: the disease state (inflammation of various degrees) and symptoms/nutrition problems as a result of disease or its treatment, such as decreased taste, smell, appetite, dental complaints, swallowing problems, a disturbance of the feeling of hunger and satiety, a disturbed digestion and gastrointestinal absorption and pain.

Functional factors may include: reduced mobility, reduced or no ability to do groceries and prepare food, and fatigue.

Psychological factors may include: anxiety, sadness, depression, and impaired cognition.

Social factors may include: loneliness, no social network to run errands, and poverty.

The determinants specifically in the elderly have been brought together in the DoMap model. This pyramid of determinants (click on the image on the right) was developed by the MaNuEl (MalNutrition in the Elderly) knowledge hub. Click here for the MaNuEl toolbox.

For people living at home with dementia , the TrEat project has developed a signaling map in which signals for possible nutritional problems and increased risk of malnutrition are described for this target group.

Also in children, think about the underlying cause of the malnutrition and treat it if possible. For the differential diagnosis of malnutrition, see Appendix 2 of ‘the guideline ‘Screening op, en behandeling van ondervoeding bij kinderen opgenomen in Nederlandse ziekenhuizen’. The prevalence of malnutrition is high in all sectors of the Dutch health care system. On average, one in four to five patients in hospitals, healthcare institutions and home care is malnourished. Risk groups for malnutrition are vulnerable elderly people, children and adults who are chronically ill, have an oncological condition, have undergone major surgery or have severe trauma. Based on various Dutch studies and sources, the estimated prevalence of malnutrition for:

Malnutrition has negative consequences for the health of adults and children. Inadequate nutritional intake in combination with illness and/or inactivity leads to reduced muscle mass, which is an important characteristic of malnutrition. This causes a decrease in overall condition and reduced heart and lung capacity. Malnourished people more often have a poorer immune status, poorer wound healing, a greater chance of developing pressure ulcers, a lower quality of life and an increased mortality. For example, these factors contribute to a longer hospital stay, a poorer response to medical treatment (chemotherapy, radiotherapy) and an increased use of drugs, which leads to an increase in healthcare costs.

Below is an overview of the short- and long-term effects of malnutrition in children (De Wit, 1994; Mehta, 2013; Colbert, 2004; Joosten, 2010, Multidisciplinaire richting ‘Eetstoornissen’ 2017). A number of studies have shown that malnutrition is associated with a poorer outcome measure.

In the SEO report ‘Malnutrition underestimated’ from 2014, the total costs of malnutrition due to illness in the Netherlands are estimated at almost € 2 billion in 2011. Research by the Knowledge Center Malnutrition among more than half a million adult Dutch hospital patients showed that the length of stay of the hospital patients classified as malnourished on admission was 1.4 days longer.

In order to determine whether there is malnutrition in children, it is necessary to measure the height and weight of the child and to plot these data in a growth curve. This can be plotted in a growth curve on paper, or digitally in the  Growth Analyzer. In Dutch clinical practice, growth curves on which the SD score is indicated are used. The most commonly used cut-off point for malnutrition is the <-2 SD. In preterm infants, using the standard growth curves up to the age of two years, correction for preterm birth is required. For this purpose, the period from birth to the due date is subtracted from the calendar age.

Global Consensus Criteria for Adult Malnutrition (GLIM) were published in 2018. A Dutch translation has been published in the “Nederlands Tijdschrift voor Voeding & Dietetiek”.  The use of these criteria for the determination of malnutrition by Dutch healthcare providers is recommended by the Knowledge Center Malnutrition. Malnutrition is diagnosed in 2 steps.

Step 1  screens for malnutrition using a validated instrument (eg SNAQ, MUST, SNAQ65+, MNA). If the outcome of the screening indicates that someone has an increased risk of malnutrition, step 2 is continued.

In step 2, it is determined whether there is malnutrition on the basis of characteristic (phenotypic) criteria and causal (etiological) criteria. The diagnosis of malnutrition is made if there is at least one characteristic criterion AND at least one causal criterion. It is then determined whether someone is moderately or severely malnourished (see images on the right).

There are 3 types of malnutrition in children: 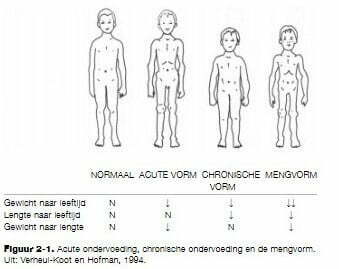 Adults and the elderly

In order to be able to start the right treatment, it is important to specify the underlying cause after the diagnosis of malnutrition. The following types of malnutrition are distinguished:

Cachexia always involves malnutrition due to chronic disease with inflammation. Cachexia is a multifactorial syndrome characterized by ongoing loss of skeletal muscle mass (with or without loss of fat mass) that cannot be completely reversed by conventional nutritional therapy and leads to progressive decline in function. Cachexia occurs in some patients with COPD, chronic heart failure, cancer and chronic kidney disease.

Sarcopenia is a progressive and generalized musculoskeletal disorder (muscle failure) associated with an increased likelihood of adverse outcomes, including falls, fractures, physical impairment, and death. Its main feature is low muscle strength. Malnutrition and sarcopenia are two different conditions that can occur at the same time. Malnutrition can lead to sarcopenia. It is therefore important to also check whether someone with malnutrition has sarcopenia and vice versa.

The above and more extensive information with literature references are described in: